Home > Sustainability > On track for a greener future 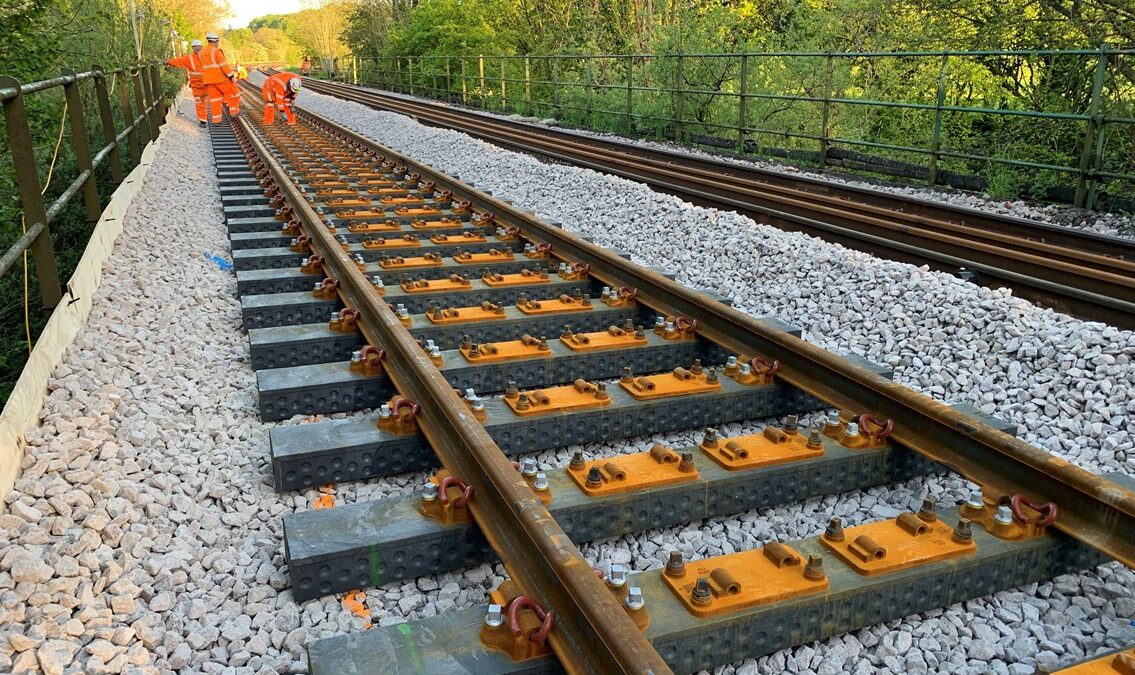 network rail has started using sleepers made from recycled plastic, produced by sicut in the UK, rather than concrete or wood
Sustainability

Transport’s role in both cutting the carbon footprint and adding to it puts it in a crucial position in the climate change challenge.

Trains and trams might take people out of polluting vehicles but what is the environmental impact of the construction and maintenance of mass transport systems?

They use many materials – cement, steel, concrete, asphalt, bitumen – whose manufacturing process emits large amounts of carbon. It is also an industry in which safety and reliability have been the watchwords, so putting the emphasis instead on cutting carbon requires a major change in culture.

The UK Government’s recent Construction Playbook, which sets out its approach to public works projects in- cluding roads and railways – as well as public buildings – emphasises meeting the UK’s target of net zero greenhouse gas emissions by 2050. In Scotland the net zero target date is 2045.

This challenge is an opportunity for the industry and Cop26 prompts a look at some of the innovations in which green credentials are prominent.

One of the Playbook’s central concepts is off-site manufacturing; this allows designers and construction firms to use standard factory-produced components rather than creating bespoke elements for each project.

One of the clear advantages of building off-site is the speed with which components can be installed. New bridges for the HS2 project to connect London and Birmingham with a high- speed rail link are a good example.

Over one weekend in August, a 2,750-tonne span was put in place over the M42 near Solihull in the West Midlands. Pre-cast concrete modular components were manufactured off site and sections of the bridge put together before being lowered into place. Traditional methods would have required several weeks of lane closures and disruption.

Concrete is one of the construction industry’s biggest sources of embedded carbon. But its qualities – strength and durability – are immensely valuable and the 45-metre Wendover Dean Viaduct for HS2 in Buckinghamshire illustrates how innovative modular components can reduce embedded carbon, while maintaining strength.

Using a ‘double composite’ design inspired by work on French TGV rail routes, two steel girders are sandwiched between layers of reinforced concrete to create a super-strong but lightweight span. The amount of embedded carbon in the viaduct was cut by 7,433 tonnes – the equivalent of 20,500 return flights from London to Edinburgh.

During the summer Network Rail started to use sleepers, traditionally concrete or wood, but now made from recycled plastic in main line maintenance work. Produced by Sicut in the UK, the plastic sleepers offer an increase in service life and reduced maintenance compared with the timber ones they replaced at the first site in Wiltshire.

As well as replacing concrete and using waste, when the sleepers are eventually replaced they can be recycled, which not only cuts CO2 emissions but adds to the sustainable circular economy. The possibilities of the Sicut product were initially demonstrated by a 30-metre bridge across the River Tweed at Easter Dawyck in the Scottish Borders a decade ago when the material came from more than 50 tonnes of waste plastic such as household bottles.

However, mass transport systems on their own will not be enough to take us to net zero, as David Symons, director of sustainability at WSP, points out:
“For the UK to be a zero carbon economy both rail travel and road travel have to get to zero carbon by 2050.

“It’s not an ’either/or’ situation and it quite simply can’t be delivered by road travellers shifting to walking, cycling and rail travel.”

He adds that in Scotland it is academic to suggest that road transport could switch completely to other means, because of its importance to Scotland’s wider economy.

“The biggest source of greenhouse emissions from transport is vehicles – trains, HGVs, cars, motor- bikes or vans – that use the network. But construction and maintenance use lots of materials and most of those materials including cement, steel, asphalt, concrete are energy intensive and, as a result, emit large amounts of carbon in their manufacture.”

With roads set to stay in the transport equation, innovations in their maintenance can help with the drive to net zero.

BEAR Scotland, which looks after trunk roads across the country, has been cutting carbon emissions in its resurfacing work.

Last year, at two sites on the A702 – one near Biggar the other at Silverburn – engineers reused material from the original carriageway that would not traditionally have been reused as a cold recycled bound layer.

The material was removed and at a mobile processing plant crushed and screened. Then, with the addition of binder and fillers Tarmac Ultifoam was produced and used in the lower base layers and overlaid with traditional hot-mix asphalt.

BEAR Scotland estimates that a 50 per cent reduction in carbon emissions was achieved in the production of the base material, and approximately 1,100 tonnes of material were diverted from landfill.