Home > Sustainability > Huge opportunities ahead in the wake of leasing round 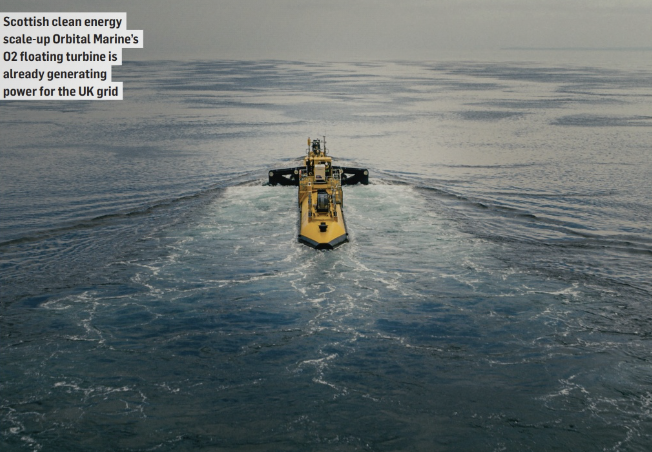 Scotland’s energy companies are investing billions of pounds as the country tries to transition from a reliance on fossil fuels to meet the ambitious target of reaching net zero by 2045, five years ahead of the rest of the UK.

While traditional energy companies are focused on moving away from fossil fuels, new entrants on the renewables side are raising funds to develop emerging technologies such as marine power and floating offshore wind.

In January this year Crown Estate Scotland announced the outcome of its application process for ScotWind Leasing, the first Scottish offshore wind leasing round in more than a decade and the first since the management of offshore wind rights were devolved to Scotland.

In the leasing round 17 projects were selected from 74 applications. The Estate said the area of seabed covered by the projects is just over 7,000 square kilometres and initial indications suggested a multi-billion pound supply chain investment in Scotland. It added that the potential power generated would provide for the expanding electrification of the Scottish economy as it moves to net zero. Among the big names selected were Scottish Power Renewables, Shell New Energies, Vattenfall, BP Alternative Energy Investments and SSE Renewables.

Simon Hodge, chief executive of Crown Estate Scotland, said: “In addition to the environmental benefits, this also represents a major investment in the Scottish economy, with around £700 million being delivered straight into the public finances and billions of pounds worth of supply chain commitments.”

Just last month, SSE announced it would invest £15 billion in Scottish clean energy infrastructure by 2030. It said it would put money into technologies such as new offshore wind, critical network upgrades, carbon capture and storage (CCS), batteries and hydro-electric power.

It is developing Scotland’s largest and the world’s deepest tethered offshore wind farm, Seagreen, off the coast of Angus, alongside what will be one of Europe’s most productive onshore wind farms, Viking, on Shetland.

Alistair Phillips-Davies, chief executive of SSE, said: “Against the backdrop of a global gas crisis, we are investing far more than we are making in profit to deliver clean homegrown energy that will bolster security, cut emissions and make energy more affordable over the long term.”

As well as meeting net-zero targets, the energy sector expects to support thousands of jobs as the country moves to renewables, if investment and government support is forthcoming in the short term.

A report published last month by Robert Gordon University (RGU) on the future shape of the energy workforce in the north-east of Scotland said that if the region attracts £17 billion of renewables investment and activities over the next eight years it will be established as a global energy hub, securing thousands of new jobs.

The RGU ‘Making the Switch’ review indicated that much of the £17 billion investment in regional renewables activities needs to be front-loaded as capital expenditure funding in the next four years to establish new large-scale manufacturing and installation capacity.

Professor Paul de Leeuw, director of the Energy Transition Institute at RGU, and the review’s lead author, said: “The energy transition will create exciting new opportunities and industry, governments and the education sector all have a key role to play. It will require a careful balancing act. The opportunity of getting this right has the potential to secure the region’s economy as a global energy hub for decades to come. However, if we move too slowly, there won’t be a role for everyone, and it will risk a hard-hitting economic decline for the noth-east of Scotland. This must be avoided at all costs.”