LawscotTech is spearheading the move towards a tech-enabled future. It’s a phrase that conjures up images of some sort of McRobocop cyborg law enforcer hellbent on riding Caledonia of cybercrime.

In fact, The Law Society of Scotland’s LawscotTech has the more prosaic aim of stimulating legal technology innovation to deliver practical benefits for those working in the justice and legal sectors and their clients.

For a profession that wears its tradition heavily on its berobed sleeves, with its penchant for wigs and Latin, such enthusiasm to embrace innovation is welcome – and essential.

That enthusiasm has been encouraged, partly, by coronavirus legislation which accelerated the pace at which legal tech has been adopted in Scotland, as the profession moved swiftly to an online world, from remote working to on- line court hearings, enabling the use of electronic signatures and digital service for some court documents, including warrants and citations.

According to Rob Marrs, Head of Education at the Law Society of Scotland, the pandemic has convinced many who may have been ambivalent about technology that they need to embrace it. “This goes way beyond video calls though; we’re talking about a reimagining of what the legal sector should look like,” he said.

“This isn’t just about tools in terms of technological solutions that specifically cater to the legal sector’s needs. This is about how firms and organisations need to adapt by introducing the required skills across workplaces and through specialist roles like legal process engineer and legal technologist.”

Rob Aberdein, chief commercial officer at Progeny, is a Law Society of Scotland accredited legal technologist, who believes that to be credible, relevant and competitive over the next decade law firms will need tech savvy people.

“The profession has reached a tipping point where you’re either committed to technology and place it as a key pillar for growth, or, if not, you will not have a long lifecycle because your competitors will achieve scale, profitability and innovation at a greater level and, ultimately, clients will start dealing with firms that are tech-enabled and can offer a better customer experience,” he said.

“Scots law and the jurisdiction has always been renowned around the world as a place that you want to do business, but if we’re seen to become a backward jurisdiction then we’ll become less appealing.

“There’s a recognition that Scots law should be seen as quality, but also as a progressive jurisdiction – and it feels like it’s going in the right direction with LawscotTech.”

It’s a feeling supported by evidence. Last year the Scottish Government worked with Axon to deliver a Digital Evidence Sharing Capability (DESC) to overhaul how evidence
is handled by the criminal justice system. From crime scenes to courtrooms, the DESC service facilitates swifter and more effective investigation, reporting and presentation of court cases.

The initiative has the potential to significantly reduce the costs involved in managing and transporting evidence such as CCTV footage, video interviews and forensic images in physical form while advances in technology now make it practical for police officers to search fingerprints in the field by running on-the-spot checks against UK Home Office biometrics databases.

These capabilities feature in Motorola Solutions’ Pronto policing platform that lets officers send digitally acquired prints to a biometrics gateway for cross-referencing against relevant criminal records and immigration databases. Until last month there was no specific legal basis in Scotland for the police to capture fingerprint data without consent from persons who have not been arrested. This situation has changed with the advent of a new statutory code of practice.

In a world first, this national code on the use of biometrics for policing and criminal justice purposes will assist Police Scotland and others in making future decisions on investment in biometric-enabled technologies in Scotland against a framework of appropriate legal safeguards.

Given the rapid pace of technological progress, perhaps McRobocop is not so far fetched after all?

“If we’re seen to become a backward jurisdiction then we’ll become less appealing.” 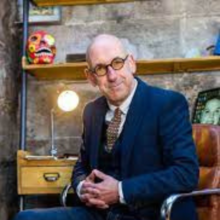