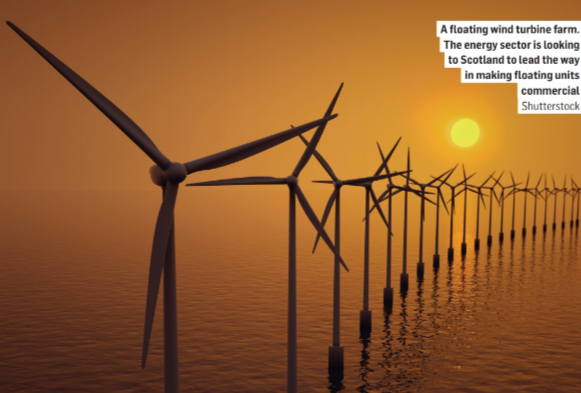 Infrastructure, expertise and experience all in place for key role in renewable energy projects

Scotland is in a prime position to become a global leader in commercial floating offshore wind, according to expert legal advisers to the industry.

Globally, approximately 80 per cent of potential offshore wind power resources lie in waters more than 60 metres deep. While such sites generally offer stronger and more continuous wind, they cannot be exploited with conventional ‘fixed bottom’ wind turbine units. And this is where floating turbine units have a vital role to play if the transition from a reliance on fossil fuels in order to meet ambitious net zero targets is to be achieved.

The UK Government envisages floating turbines making up five gigawatts (GW) of the total 50GW of offshore wind capacity to be delivered in UK waters by 2030. However, that is just the start.

David Cruickshank is a partner in the energy and infrastructure practice at Dentons, the world’s largest law firm. He specialises in domestic and international renewable energy projects.

“One reason for this is the prominence of oil and gas majors among the successful ScotWind bidders.

“Floating units are currently more expensive than fixed bottom ones, but it’s these companies, with their access to finance and offshore engineering expertise and cost reduction know-how gained over decades of operating massive floating structures in the North Sea, who will be best placed to make floating competitive with fixed projects.”

Collaboration between ‘old’ and ‘new’ energy is also being encouraged by the Innovation and Targeted Oil and Gas (INTOG) leasing round due later this year in Scotland. This will allow developers to apply to build offshore wind farms to supply oil and gas installations.

Cruickshank says: “INTOG will give another major boost to floating offshore wind power as it can potentially be located closer to upstream platforms to provide them with low-carbon electricity, rather than gas- or diesel-fuelled power. This will reduce oil and gas production emissions and the infrastructure will play an ongoing role in the transition to green energy, potentially including the production of green hydrogen.”

Is the combination of floating offshore wind and green hydrogen fanciful? Cruickshank does not think so. “To be competitive, green hydrogen producers need the most consistent renewable resources – in Northern Europe, you find those in the areas that only floating turbines can exploit. Also, producing the hydrogen offshore may be safer, and getting it to market from an offshore platform may be cheaper and more straightforward than connecting a very remote offshore wind farm to the onshore transmission grid.”

Green hydrogen is key to the EU’s plans to use renewables to promote energy security, as well as its net zero ambitions. Cruickshank points out: “There is already German industrial demand for Scottish green hydrogen. And the export potential doesn’t stop there: the supply chains we need to support Scottish floating offshore wind projects, potentially in green freeports, could serve overseas, as well as UK markets.”

One company in a prime position in this area is energy giant Vattenfall which was awarded £20 million for a floating wind joint venture project with Fred. Olsen Seawind off the east coast of Scotland in this year’s ScotWind Leasing round. And, just last month, the UK Government awarded £9.3 million to Vattenfall in innovation funding to build an offshore hydrogen electrolyser in Aberdeen Bay.

Danielle Lane, Vattenfall’s UK country manager, said: “There’s a lot of talk about hydrogen’s potential uses, but we need to urgently map out the development and delivery processes so we can quickly get to the stage where we can produce large quantities of fossil-free hydrogen cost-effectively.”

Cruickshank concludes: “Scotland has a bright future when it comes to the commercialisation of floating offshore wind and ensuring that green hydrogen is part of the energy mix.”

Collaboration and education are required for climate change action