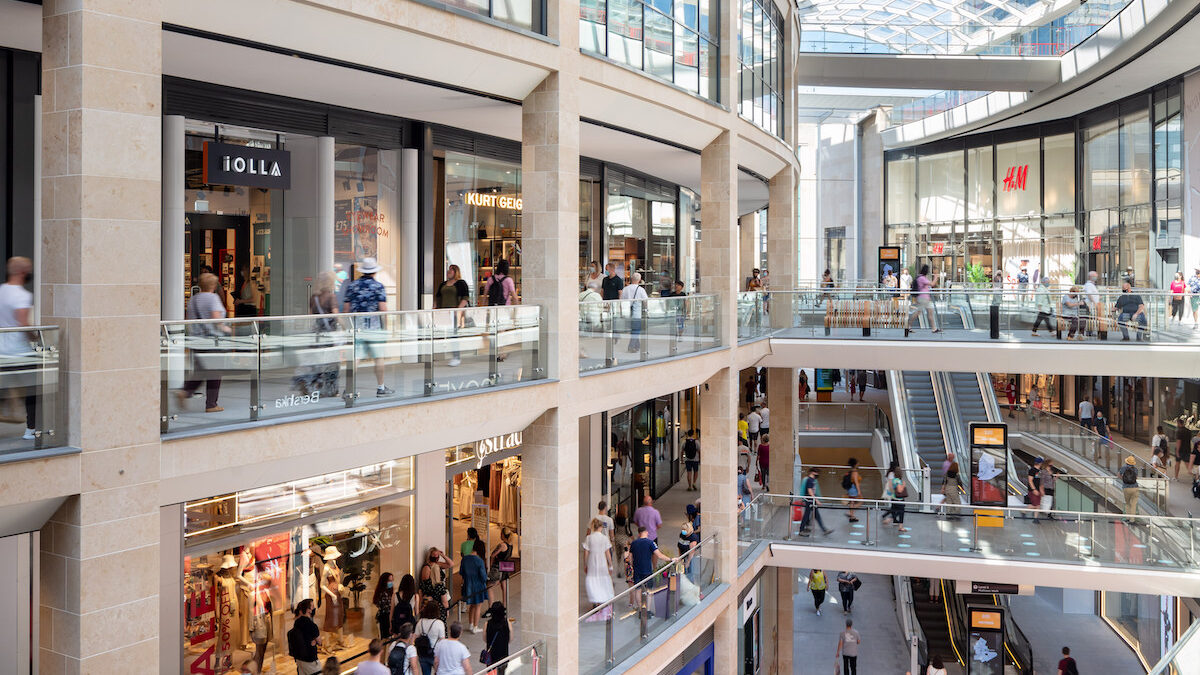 Edinburgh St James is a 1.7 million sq ft city centre development and one of the biggest regeneration projects currently underway in the UK. On completion, Edinburgh St James will provide the Scottish capital with up to 850,000 sq ft of prime retail space, five star hotel accommodation and will deliver up to 250 new private residential apartments. This will create a vibrant and exciting place to live, visit and shop in the heart of Edinburgh. Architect: BDP and Allan Murry Architects. Developer: Nuveen Real Estate. main contractor Laing O’Rourke
Property

As a market report from a global real estate consultancy noted recently: “The only way is up.”
It has undoubtedly been a challeng- ing 18 months for the commercial real estate sector. First, the coronavirus pandemic prompted the Scottish Government to recommend the closure of construction sites unless the work was for an essential building.

Then, as fears concerning travel and the proximity of fellow workers in the workplace grew, the media Cassandras unsurprisingly predicted (wrongly as it transpired) the death of the office as working from home became the new normal.

Those in the sector, however, have dealt with the situation with an admirable degree of equanimity.
Stephen Lewis, managing director of HFD Group, the firm behind Glasgow’s single biggest office build- ing, 177 Bothwell Street, concedes that the past few months have represented something of a “great experiment” during which various possibilities have been seriously weighed up.

“Many people have been reconsidering what they are likely to need in terms of office space and how that aligns with a desire for more flexible working patterns, including working from home,” he says.
Karen Turner, Director of Lettings Edinburgh & Glasgow for Rettie and Co pointed out recently in the firm’s Lettings Autumn 2021 report that the market in Scotland has seen a chang- ing pattern of demand over the past year, with the strongest demand now in suburban and semi-rural locations where families are keen to relocate due to their ability to work from home.

Rettie’s report adds that Edinburgh’s rental market has clearly been more impacted by the pandemic, with key sectors of the economy – which drive rental demand – being acutely impacted.

By contrast, Glasgow’s commercial rental sector has remained more stable, resulting in strong growth figures over the short- to medium-term.

With lockdown restrictions easing, tourism returning and economic migration resuming, average rents in Edinburgh have already returned to growth in the second quarter of 2021. For Glasgow, economic recovery is also expected to drive demand and support consistent rental values in the city moving upwards.

There are clear differences between the markets in the east and the west of the Central Belt. James Thomson of Cushman & Wakefield points out that in Edinburgh the older office stock has important potential to attract higher values for alternative uses. “Office buildings coming up in the city centre have tended to attract higher values for residential use either through conversion or redevelopment but also hotels, aparthotels and student residences.”

He also underlines the acceleration of an emphasis in sustainability that has occurred over the past 18 months. This has been driven, he says, not only by a general move in that direction but also the insistence by investors that this is what they want to see. “Many of the UK’s biggest landlords and developers are signing up to this and ensuring that through the design process we apply more testing measures to improve sustainability and raise the bar.”

John Rae, who heads up Glasgow’s capital market team, points to the long-term nature of the business: “People have committed to big projects that can’t just be stopped overnight,” he says.

These developments, Rae says, will be seen through to completion and while the projections might change during the first stage of their operation, time will tell. There are long leases, good occupiers and we will, he thinks, come through the pandemic in a positive way – and that includes hotel operators who have had to be very fleet of foot to successfully counter challenging circumstances.

It’s a positive trend that those involved in Edinburgh’s St James Quarter hope is borne out. The retail and residential development opened phase one, an 850 sq ft shopping galleria with 80 retailers, in June.

Martin Perry, director of development, admits that the impact of Covid has had a profound impact on the UK retail scene.

However, he adds: “Retail required a rethink long before the pandemic. The high street was already changing, which is why we have been continually working with our partners, retailers, and the city as whole to ensure that the St James Quarter continues to be enjoyed by generations to come … throughout this pandemic we have never questioned our investment in not just the £1bn St James Quarter but in the city itself. We’re here to stay and we’re here to help.”

HFD’S Stephen Lewis believes that the biggest drivers for the immediate future include sustainability and wellness. “A lot of buildings have a long way to go, they are playing catchup, and what does ‘wellness’ mean? It involves people getting outside to get fresh air, it’s about the best day lighting levels – all the things taken into consideration by the WELL Building Standard that certifies and monitors features of the built environment that impact human health. Sustainability, he adds, inevitably involves costs: “But now it’s a moral imperative. While there’s still a degree of catchup and ‘greenwashing’, occupiers are demanding change and investors are intent on buying the most sustainable buildings because realistically, that’s where the value now lies.”

Colin Cardwell is a freelance journalist

Huawei set to open debut office in Scotland, according to property industry sources

How blockchain technology could revolutionise the construction industry