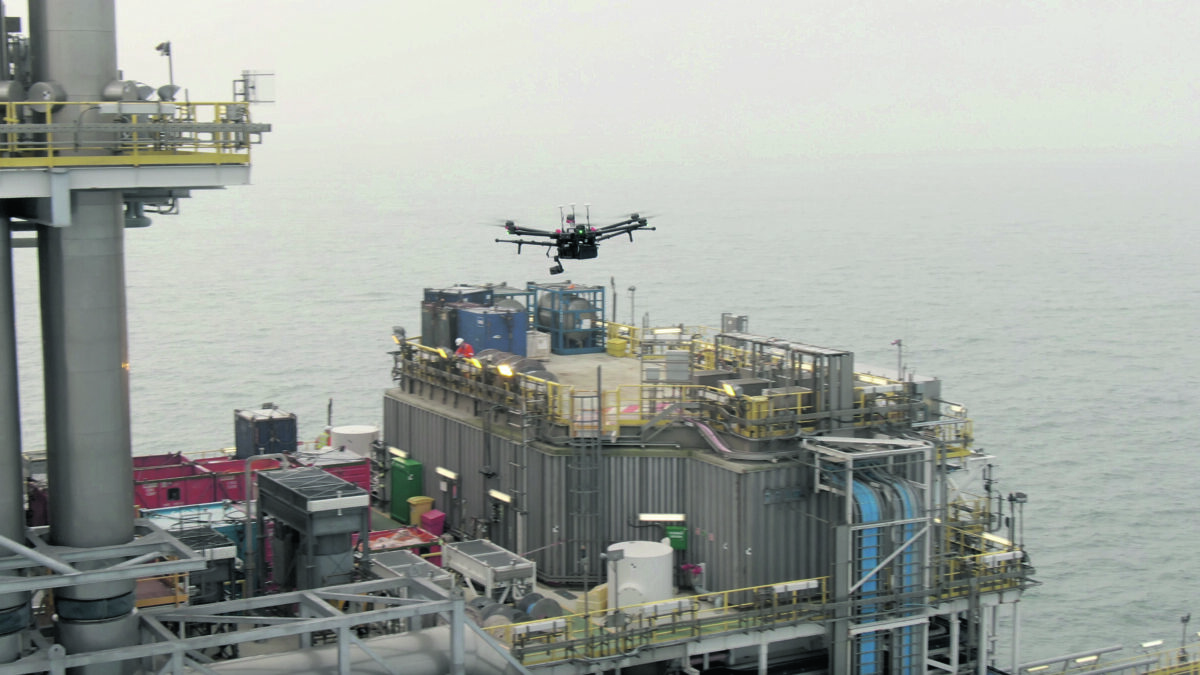 Neptune Energy, an offshore operator, recently partnered with the Environmental Defense Fund (EDF) in September this year to test a first-of-itskind approach, using drones to enhance methane emissions measurement and mitigation on an offshore platform in the North Sea
Sustainability

In advance of Cop26, OGUK, the leading representative body for the UK offshore oil and gas industry, published a far-reaching report on how technologies pioneered by the UK’s offshore industry are essential in reaching net zero and boosting economic growth.

It pointed to encouraging statistics that state the UK oil and gas sector will enable 100 million tonnes of CO2 to be safely stored annually by 2050.

This follows a 10 per cent reduction – equivalent to 1.8m tonnes – in industry emissions since 2018, with the report saying the industry is on track to achieve its target of a 50 per cent cut
by 2030.

It predicts the industry’s low carbon plan could unlock 40,000 jobs in energy communities across UK OGUK’s Energy Transition Outlook report was released just days after the UK Government unveiled its Net Zero Strategy which stated that carbon capture and storage, linked with mass production of low-carbon hydrogen, will be essential in meeting carbon reduction targets.

The OGUK report stated: “The oil and gas sector has unique experience in implementing and operating large offshore infrastructure projects. This ability and understanding is key for the success of carbon capture and storage.”

It added: “Hydrogen is an important technology opportunity for the UK and is required at scale to achieve national decarbonisation objectives.”

And the trade body’s report called for long-term investment in essential new technologies, particularly in the early years of their development. Katy Heidenreich, supply chain and operations director with OGUK, explains: “Companies in the UK offshore oil and gas industry are the driving force behind a range of crucial green technologies that are central to this country achieving its climate goals.

“For many years, oil and gas companies have been behind renewable energies like wind, tidal and solar. Our sector is also accelerating carbon capture and storage, as well as hydrogen, which the Climate Change Committee has said are critical for the UK to hit its target of net zero emissions by 2050.

“Our industry also recorded a 10 per cent drop in production emissions last year, with at least half of them being achieved by efficiency improvements and reduced flaring and venting. Offshore platform electrification, where installations are powered by electricity from renewables instead of oil and gas, is another key way we’ll reduce emissions even further.”

According to Heidenreich, the 50-plus years of global offshore energy expertise developed since exploration and production began in the North Sea in the 1960s is a major asset for the UK when it comes to renewables and achieving net zero.

“Similarly, there are a large range of subsea specialisms needed for carbon capture and storage, hydrogen and geo-thermal energy, that have been used in oil and gas well production for decades – from reservoir engineers and geologists to geochemists and seismic specialists.”

She describes the industry’s supply chain as world-class with skills and expertise that are sought after around the world.

This well-developed supply chain is seen as crucial to delivering the diverse mix of energies that are being developed to help countries achieve Paris Agreement commitments, while keeping their societies and economies functioning, adds Heidenreich. And she cites research from Robert Gordon University that shows over 90 per cent of the UK’s oil and gas workforce have medium to high skills transferability.

There are well-documented barriers to be overcome in developing technologies and ensuring they are effectively used in the drive towards net zero.

Referring to some of the key challenges, Heidenreich says: “For something like hydrogen there needs to be a market for companies producing it to sell into. We need political support for a stable, competitive environment in which we can invest. It’s important the UK maintains a strong oil and gas sector which provides the ability for companies to pivot towards net zero. We need continued investment in oil and gas to support the supply chain in its ability to develop and transition technologies.”

And action is needed now if the UK is to capitalise on the technological opportunities that exist, building on the legacy of oil and gas, according to Heidenreich. She calls on the UK to benefit from ‘first mover advantage’.

“We want to make the UK a ‘green energy Silicon Valley’ with exciting new industries for our key energy communities, like Aberdeen, Merseyside, Teesside and the East of England,” says Heidenreich. “By supporting our supply chain to also be clean energy specialists as well as experts in lowering carbon emissions of traditional fuels, we can export those services around the world, boosting the UK economy and helping other countries cut their emissions and get to net zero, so the planet’s temperature rise can be mitigated and a climate catastrophe averted.”

She pinpoints carbon capture use and storage as an important emissions reduction technology. She describes hydrogen as a highly versatile greener fuel that can replace natural gas in boilers and cookers or be used to power lorries and other heavy vehicles where batteries are impractical.

In terms of the impact of Cop26, Heidenreich concludes that the summit will provide the opportunity to
showcase the carbon capture ‘cluster’ projects the UK is developing around the country.

There are numerous examples of innovative technologies being developed across the supply chain that are helping the drive to net zero.

One organisation that is leading the way is East Kilbride-based TÜV SÜD National Engineering Laboratory, part of a global company operating in more than 50 countries.

Ewan Fisher, head of sales and business development at TÜV SÜD National Engineering Laboratory, says that as the UK Designated Institute for Flow Measurement, it has worked with the oil and gas industry for more than 40 years to ensure accurate measurement and metering of vital hydrocarbons.

“We are now using our flow measurement expertise to support the energy transition, by applying that knowledge to hydrogen and carbon capture, enabling accurate measurement for both fiscal and environmental reasons,” he explains.

“We have also invested in new testing facilities to support the clean energy sector. These include a state-of-the art-facility for testing domestic gas meters with hydrogen ahead of potential deployment into the grid, and the UK’s first mobile testing standard for hydrogen refuelling stations.

“Both these projects will play a key role in the UK’s transition to the use of hydrogen as an energy carrier for transport and domestic heating.”

Another example of innovation is Neptune Energy, an offshore operator, recently partnering with the Environmental Defense Fund (EDF) in September this year to test a first-of-its-kind approach of using drones to enhance methane emissions measurement and mitigation on an offshore platform in the North Sea.

Global oil services company Halliburton meanwhile has a range of low carbon initiatives. For example, it can deploy fully electrified, automated well intervention fleets that cut emissions,
partly through reduction in helicopter use.

‘I’m keen to see what can be achieved by diplomacy'