Home > Sideways Glance > How Morgan became chairman of the board 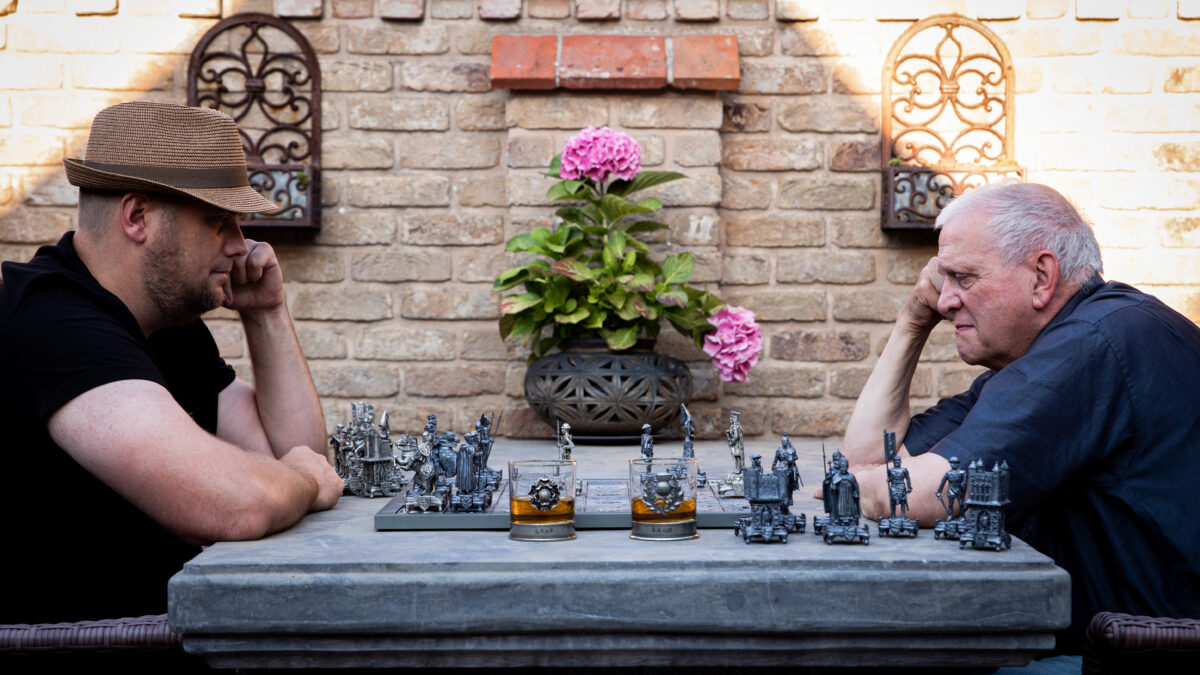 How Morgan became chairman of the board

We’ve all done it. Scouring the shelves in our rented holiday apartments looking for something decent to read. John Morgan was out in Spain when he pulled out a well- thumbed paperback. It was The Path of the Hero King, by famed historical novelist Nigel Tranter, and the second part of his trilogy, The Bruce.

For Morgan, who was stepping back from a successful career running his own marketing consultancy, it transported him back to the rebellious times of 13th- and 14th-century Scotland.

On his return to Glasgow, he decided to create a chess set to commemorate the Battle of Bannock- burn in 1314 and began his research. It took several years of planning and the blessing and encouragement of Tranter himself to produce a masterpiece.

With an amazing eye for detail Morgan has been creating magnificent chess sets, painstakingly produced from hand-cast pewter, culminating in the Battle of Bannockburn set for the 700th anniversary in 2014. He’s recently followed this with a Robert Burns set.

Working from Stirling Enterprise Park – the former John Player’s cigarette factory – Morgan ensures each set is a collector’s edition, a work of art and an heirloom. As such, they are not your everyday purchase. But with the likes of Historic Scotland going all ‘interactive’ to encourage ‘engagement’ what better way than to have these fantastic sets available on site for keen young chess players to play and enjoy in dozens of Scottish castles, palaces and battle sites? www.stirling1314.com

A seasonal pitch
It’s the time of year when earnest publications choose their business books of the past 12 months. We would like to select a tome from the well-respected technology entrepreneur, Martin Ritchie. He made a comfortable living as one of the founders of Spider Systems and is now chairman of Trig Avionics, a business supported by the Archan- gels syndicate of investors. However, Martin has written As Seen From The Boardroom: My Story of Falkirk Football Club 1998 to 2019, a blow-by-blow account of his time as chairman helping to run one of Scotland’s senior football teams.

It’s a tale of derring-do (and derring-don’t), a self-penned account, which includes the wooing of manager Ray MacKinnon from Greenock Morton (which ended in a hefty legal bill for The Bairns). The book is available through the Falkirk fan shop.

Martin Ritchie writes: ‘Speculate to accumulate’ is one of the most terrifying mantras in football. Yet, it remains almost a requirement to gain promotion. Falkirk put up an extra £500,000 to push for promotion in 2005 and were promoted.”

While there’s chat about the players, managers, great matches – including thumping Heart of Midlothian 4-0 in the cup and later reaching the 2015 Scottish Cup Final but losing to Inverness Caley – the constant battle is to keep the club finances in the black. It’s intriguing to hear about the move from Brockville to the new 8,000 all- seater Falkirk Stadium and how this space became more commercial. Concerts were a lucrative side hustle with Rod Stewart appearing at The Falkirk Stadium in June 2014.

“With the artificial pitch fully protected, seating was laid out across the pitch. 17,000 people turned up on a beautiful evening for a fantastic concert. The concert turned in a profit of £70,000.”  On August 1 2015, Sir Tom Jones was the attraction and a crowd of 12,000 turned up. Then in June 2018, Little Mix saw the first over 20,000 excited fans on the pitch. Up until then the biggest attendance at the football ground. A nice wee trivia question.

A Funny Old World item in Private Eye had a Free Church of Scotland minister from North Uist and Grimsay Presbytery claiming that it was God’s wrath over CalMac running sailings to the Western Isles on the Sabbath that was responsible for the unfeasibly high number
of cancelled ferries. Others might think it’s just the clapped-out vessels and a procurement fiasco caused by the Scottish Government. Whatever your beliefs, it’s an Almighty mess.