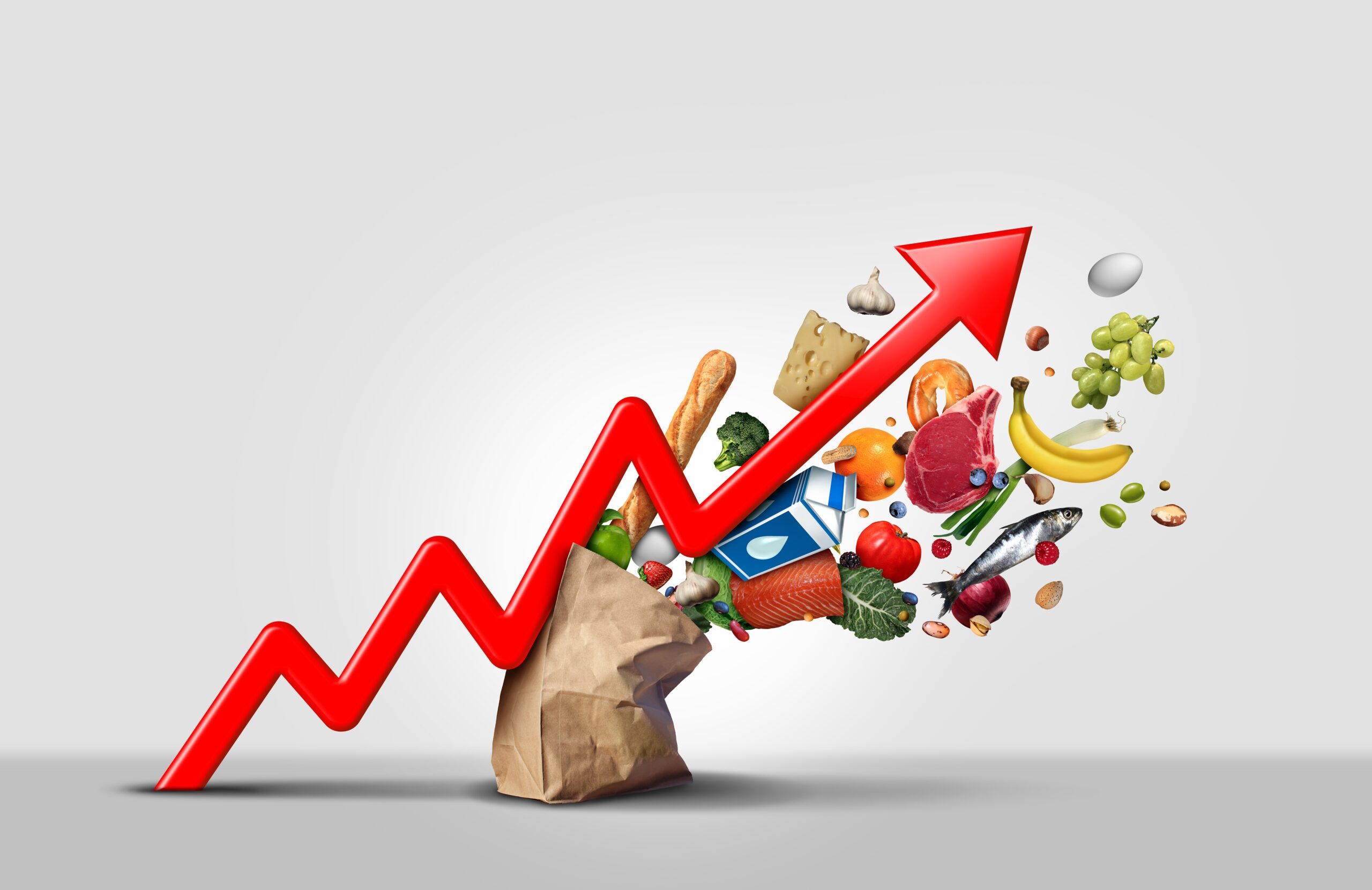 Inflation, labour shortages and global uncertainty are combining to make it a tough time for businesses as well as consumers. But there are ways to adapt and emerge stronger from the current crisis

The most recent inflation data from the Bank of England confirms that this will be another challenging year for households, employers, and public service providers.

Inflation was 2.5 per cent in April, according to the CPI – the basket of goods and services (excluding housing costs) used to measure inflation – up from 1.1 per cent in March. This contributed to a 9 per cent rise in prices for the 12 months to April, the fastest rise since the data began in 1997 and possibly as far back as 1982 according to some estimates.

Energy bills have been rising, as oil and gas prices remain at elevated levels in part due to the war in Ukraine. After a rise in the UK’s energy price cap, average gas and electricity prices jumped by 53 per cent and 95 per cent respectively in April compared with a year ago. The governor of the Bank of England has also highlighted that rising global food prices are a “major worry”, reflecting on food shopping bills which are increasing and rose 6.7 per cent in April 2022 compared with a year earlier.

Businesses and public and third sector employers are also feeling the pinch. The net impact of energy rises will vary depending on the sector, premises and contract terms. Some data suggests energy prices for businesses are accelerating as fast as those for households. Fuel prices have also been surging to record levels, with average petrol prices reaching 167.7p per litre in May 2022.

Construction material prices rose in March 2022 by 5 per cent, up 24 per cent on the same month in 2021 and VAT has now been reinstated at the full rate for most businesses. This as well as higher National Insurance Contributions are contributing to rising costs.

A tighter labour market has also been putting some pressure on the cost of labour. There are more job vacancies than unemployed people looking for work in the UK for the first time since records began. A total of 76 per cent of Scottish businesses in the recent FAI/Addleshaw Goddard Scottish Business Monitor reported that a lack of the required skills and experience in candidates was the biggest factor making filling vacancies difficult (76 per cent), followed by a lack of applications (69 per cent) and wage expectations (56 per cent).

To dampen current inflationary pressure the Bank of England raised interest rates in May to 1 per cent.

Scottish GDP bounced back strongly in 2021 (6.9 per cent compared with 7.5 per cent in the UK). However, the first quarter of this year suggests that the rate of expansion is slowing. UK GDP data fell by 0.1 per cent in March after a flat February, with the risk of recession now rising again.

Business activity in Scotland has remained positive to date. Retail sales rose in April, by 15.3 per cent compared with 2021, although these figures were still down slightly on 2019, and the Royal Bank of Scotland purchasing managers’ index (PMI) of business activity for Scotland rose marginally from 58.4 in March to 58.9 in April on a seasonally adjusted basis, indicating continued expansion. However, data from the S&P Global/CIPS UK PMI indicated a rate of expansion in May for UK business of 51.8, a 15-month low.

The picture for the economy in the coming months is more uncertain and households are starting to respond to rising prices. The GFK Consumer Confidence Index for major purchases fell to -40 in May 2022, its lowest point since the index began in 1974, down by two points from -38 in April.

The rate of increase in pay is also moderating. Weekly earnings, when adjusted for inflation, dropped by 1.2 per cent, the biggest fall since 2013.

It is also not clear when energy prices might peak. The energy price cap is to rise in October to £2,800, which is around eight per cent of average household spending and Scottish Power has suggested that 40 per cent of households could be in fuel poverty this winter.

Seven in 10 firms surveyed in April by the Scottish Chambers of Commerce indicated that they intended to raise the prices of their goods over the coming months. The most common concerns among businesses for the coming months were the costs of energy (91 per cent), the price of inputs (86 per cent), the availability of inputs (81 per cent) and new staff (81 per cent). Data suggests businesses will respond to high energy prices by either raising prices or by reducing activity, with businesses in the wholesale and retail sector (48 per cent) and transport and storage sector (47 per cent) most likely to reduce operations.

The Bank of England forecasts inflation will peak at 10 per cent by the end of this year, moderating in 2023 and returning to 2 per cent in 2 years. There are worries that the rate of inflation will remain stubborn given the wider pressures on the economy and interest rates could rise to 2.5 per cent by the end of next year.1 However, further decisions on rises are likely to be tempered by concerns about the rising risk of recession.

Responding to the challenge

The UK Government has taken steps to alleviate some of the pain for households through a package of measures.

However, there is no silver bullet for businesses and other organisations of any size in addressing the multiple challenges of rising labour, energy and material costs and supply chain shortages. Nevertheless, the recent pandemic showed us how quickly many organisations were able to adapt when needed and we consider here some of the ways business might adapt to the current crisis and emerge stronger.

SCDI’s annual forum brought together leading UK and international thought leaders from across government, industry and academia to create a more prosperous and sustainable Scotland. The forum considered new approaches to the challenges facing Scotland, including inequality and sustainable growth and how to seize new opportunities for green trade, enterprise growth and innovation.

The theme of the event, which has now been held for more than 50 years, was ‘A new sense of purpose’. The event took place in June in Edinburgh ahead of the launch of the Business Purpose Commission’s report findings.

While it might seem counterintuitive to invest at a time of rising costs, there are a several reasons why this is the right thing to do at this time. Borrowing costs are low, investment finance is available and the UK Government has increased capital allowances for investment and the availability of grants and loans for business.

At the Scottish Council for Development and Industry (SCDI), in the wake of Cop26, we have seen an upsurge of businesses investing in net-zero emission and circular economy solutions. Reducing your demand for energy has never been timelier and there are many tools to help businesses measure and develop their plans to reduce carbon in their organisations.

A sustainability plan is now also a pre-requisite for many lenders. Forthcoming legislation on the circular economy and decarbonisation of heating create further incentives to act now and achieve a competitive advantage as well as spreading the cost of investment. The SCDI has been working with NatureScot to signpost to businesses where to start to get help.

Reap the benefits of technology investment

Digital technology investment, whether to enable more efficient operational processes or to achieve better sales and customer management, was the focus for many businesses in 2020 and 2021. With 55 per cent of customer interactions happening through digital channels this type of investment is more important than ever.

Unfortunately, many organisations don’t allow for the amount of time required to make a success of technology investments but now is the time to address this to realise the benefits. Help is at hand from Scotland’s enterprise agencies, the Scottish Government, and from Scotland’s data innovation centre, The Data Lab, to support organisations to implement lasting change.

Invest for the future through innovation

The pandemic also saw firms innovate to adapt to challenges and find new opportunities. While 2021 saw a net loss of 19,000 businesses, this figure also includes new businesses that started and churn can bring innovation. Around a third of Scottish businesses we asked are looking to invest to innovate, with new business practices and methods of processing information or communications the leading areas of focus.

Of concern, however, is that over half (55 per cent) of businesses surveyed are not planning to invest to innovate despite research showing that more than 25 per cent of revenue and profits of companies come from new products (for the top performing companies this is up to 30 per cent). An uncertain risk-to-return ratio from innovation is often a barrier. However, learning from peers can help businesses to implement innovation successfully and make an early improvement to their bottom line. Productivity Clubs across Scotland are a valuable resource.

The Bank of England is forecasting a rise in unemployment suggesting an easing of labour market pressures. However, shortages may persist in some sectors and investing in the training and development of your staff can boost both retention and productivity. Modern Apprenticeships have been rising sharply (up 34 per cent in March 2022) as more businesses begin re-investing to grow their future talent pipelines. Meeting the needs of staff with flexibility on remote working options and investing in the latest technology are also factors that can help attract staff, particularly early career-stage entrants.

As the co-chair of the Business Purpose Commission for Scotland, Amanda Young, outlines in her column, it is more important now than before to for businesses and organisations to lean into their purpose to inform their decisions about how to respond to the rising cost-of-business crisis. Doing business for good is also good business to meet the needs of customers, staff, investors and communities.

Director of Policy & Public Affairs at the Scottish Council for Development, and Industry

Director of Policy & Public Affairs at the Scottish Council for Development, and Industry