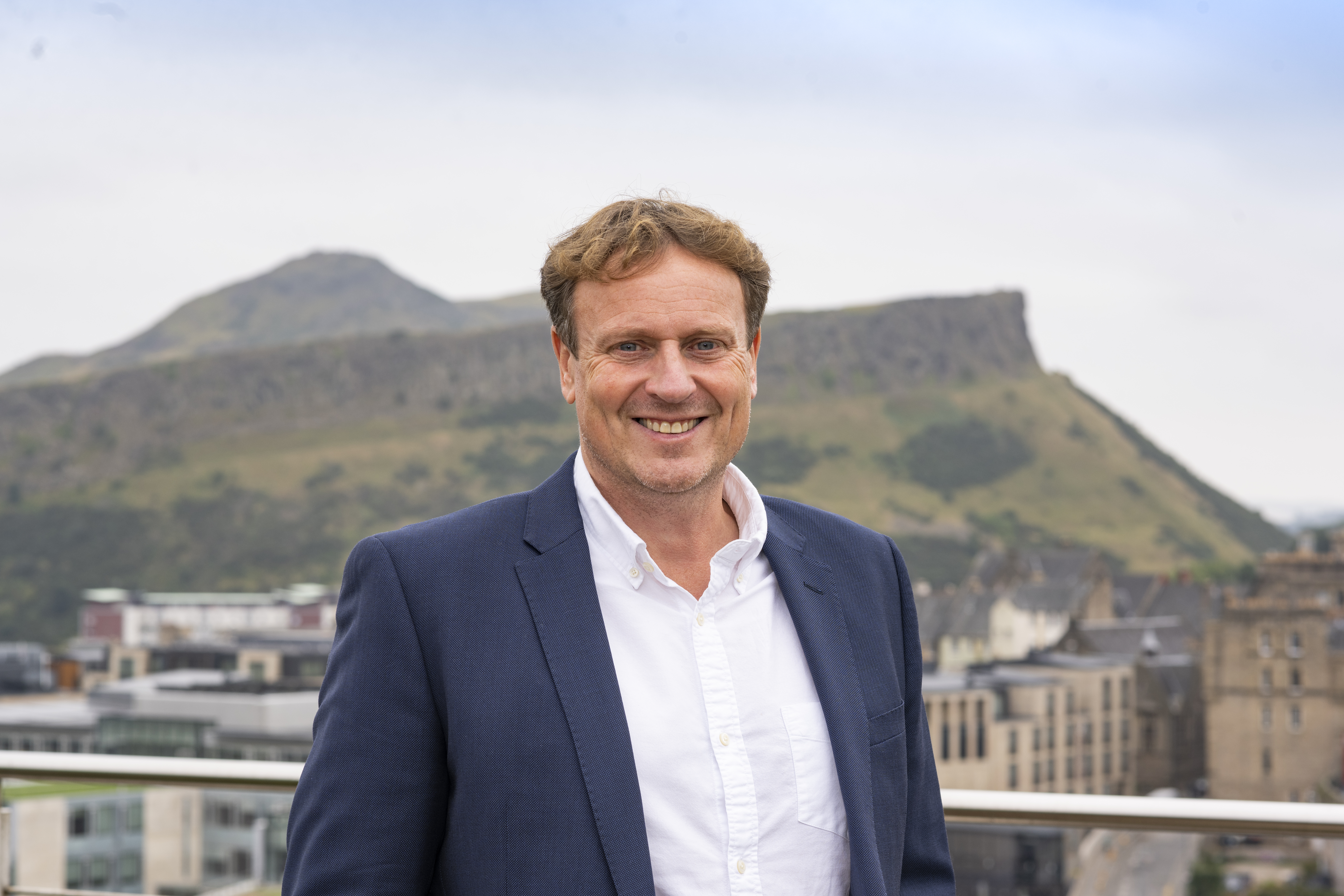 The Edinburgh-based software company is set for massive expansion in the next 18 months. But Forrit is very far from being an overnight success, as its founder Peter Proud explains

Peter Proud was a mighty high-flier at Microsoft. Indeed, he was one of the company’s earliest employees and was known to the founder Bill Gates as the Scottish guy who was always willing to step up for those big scary challenges.

In his late 20s and early 30s, he was involved in winning some major corporate contracts for the world’s biggest tech company and was well rewarded with bonuses and stock options worth a great deal.

Then, in his early 40s, he decided to set up his own technology firm, Cortex Worldwide, a cloud-based content management system, now called Forrit. The company is based in Waverley Gate in Edinburgh, the former GPO building at the East End of Princes Street.

Indeed, the average age for a founder of a software tech company is around 44 to 45.

“You use everything you’ve learned over the phases of your career with your networks to build a business. It’s not just knowing these people but being trusted to deliver. I take my hat off to people who build their businesses straight out of university because I’d like to know how they do that.”

Eight years ago, Peter Proud, then aged 44, started Cortex which changed its name to Forrit, the Scots word for forward. Today, the company has a turnover of £4.5 million, employs 50 people, and is set for massive expansion in the coming 18 months.

Proud, a working-class lad who attended Woodmill High School in Dunfermline, had an illustrious sales career at Microsoft, supporting the likes of RBS during its heyday. He still lives in Fife, cycling into the office and home again over the old Forth Road Bridge.

“I don’t necessarily think that a start-up is a young person’s game. Everyone wants to talk about start-up kids but I think it is probably better to have some serious business experience under your belt.”

He leapt from the corporate world into the unknown. “I didn’t know enough to be scared. Perhaps I should have been, now that I know how difficult it has been.”

Proud admits that even with his excellent networks and know-how, it has been harder than he ever anticipated. “We had great belief in the product and the vision. While I was a Microsoft person through and through, the book I probably got the most from was Steve Jobs’ when he said you can get a lot wrong, as long as you get the product right.”

Forrit is a software product company getting ready for international market expansion. “We have made a few glaring errors. We got it wrong making a web development platform purely for web developers when we really should have built a content editing platform for content editors. It wasn’t until we got into some very big clients, where they loved the product but found it difficult to use.”

It was designed by Forrit’s developers but not for content people within marketing departments. “We were going to have a big launch in 2021, but some of our major clients, including Tesco Bank and Lloyds of London, told us it was too hard to use.”

One advantage was that the Forrit team was not under pressure from venture capital investors or private equity partners who would have been turning the screw and expecting a launch. “Instead, we decided we could fix it by extending it to content editors. Now, we have made it very easy to use.”

Proud and his team brought in expertise in user interfaces to make the product more intuitive for the non-developers. Nile in Edinburgh, who are specialists in product design, were key partners.

“They are a very good firm in Edinburgh and we went to the founder and CEO Sarah Ronald. We went to Nile and they did about 25 user round tables and workshops. It’s is a bit of a chicken and egg – how do you get good at user experiences until you get the feedback from users?”

Forrit rebuilt the back end to include the new interfaces, making its product not only secure, scalable and robust, but intuitive to use. The result for Forrit is that they have two financial service companies, two technology firms and the Scottish Government all on a single system using the same version of the software.

Instead of chasing new clients, Forrit has concentrated on refining its offering for its existing customers and enhancing the platform. “We took a bit of risk on doing this, but it has paid off for us. This phase of the company has been about the product, the next phase is sales and marketing and then we go for global scale,” he says.

Forrit hired Gary Roberts, an experienced commercial leader in the technology sector who worked with Geneva-based Jahia, Fujitsu, Laura Ashley and Microsoft and, more recently, with Sitecore, as chief revenue officer, to build the funnel of customers.

“We’ve a few potential clients in the hopper, even before we press on with our plans. We’ve recently worked as a partner delivering for Deloitte,” says Proud.

Here, Forrit’s status as a Microsoft Gold Partner carries a massive clout. Microsoft has been revitalised under the leadership of Satya Nadella, who took over from Steve Ballmer in 2014 and also became chairman in 2021. Microsoft is championing partnerships to leverage its Azure cloud, which competes with Amazon Web Services and Google.

The Edinburgh company has survived the Covid pandemic, but it has been bootstrapped by Proud and £2 million of funding from a group of supportive local investors.

“I don’t have an expensive lifestyle. I used to see a lot of people who were very flash. I’m not like that. It’s important that you are careful and prudent and don’t throw money away. We’ve never missed a payroll and we’ve paid our bills on time,” he says proudly.

He’s coy about his own wealth but says he accrued some healthy stock options during his time. He adheres to the old adage: revenue is vanity, profit is sanity, and cash flow is reality.

For Forrit, it’s a cashbook and a profit and loss statement, something Proud learned from a fellow denizen of Dunfermline, Andrew Carnegie. “I read his biography, written in 1918, and it’s one of the best business books I’ve ever read. It talks about how cash was king and that you should always aim to have enough money to keep your lights on and honour your commitments.”

Proud recognises that while Carnegie was brutal in dealing with striking steel workers in Pittsburgh, he also cites the magnate’s Gospel of Wealth essay about how money is made and why it must be disbursed and used for good purposes. He notes that the Carnegie Trust is still disbursing money for good causes.

Closer to home, he says it is important to have a good chief operating officer who keeps a tight rein on finance. “We have Jerry Barton, who was a finance director at WPP and then the creative agency Hogarth Worldwide. Jerry’s father, John Barton, former chair of EasyJet and Next, was a successful business figure and has been an inspiration in how Jerry lives his life. Jerry is a great person to work with.”

The board includes Steven Guggenheimer, a former Microsoft executive; Carolyn Jameson, who was chief legal officer at Skyscanner and Trustpilot; Austen Mulinder, another former Microsoft colleague of Proud, and John Waddell, the former chief executive of Archangels, the Edinburgh angel syndicate, who is chairman. “The board is a great blend with sales, tech, legal and accounting.”

Proud is also a visiting professor at Strathclyde Business School, and is vociferous in wanting to get more help for Scottish companies attempting to scale up. He says some credit agencies are sloppy in their company assessments and this can lead to companies being refused vital cash for growth.

“How can and should the government help scale-ups, perhaps by underwriting when they are going through the due diligence required to win contracts. The easiest way to get a big deal, is to be big already. How do businesses get this help, because sometimes companies cannot scale because of the cash flow. It’s an important question,” he says.

Thankfully, this isn’t an issue for Forrit, which is a Microsoft Partner. “We get revenue from our software and some from our services. The big guys do all the delivery and services to their customers using our software, while Microsoft gets the Azure cloud finance. We are standing on the shoulders of giants to help us scale.” The benefit of the cloud is that small companies can build massive solutions, making them able to compete in much bigger markets.

“What we have built would probably have cost £50-60 million if it wasn’t for the cloud. So, we’ve been able to build something when one of our competitors has raised £330 million for a similar software product. But we can take them on head-to-head. Our technology is probably better!” He said he has done this in Scotland, working smartly, not opening fancy offices in San Francisco and not selling under-cooked technology too early. Peter Proud remains passionate about success as an entrepreneur – and displays the same determination that took him to the highest places in Microsoft.